Can’t Live Without My Plugable Headset

The other night I was frantically searching for something I thought I would never need: my Plugable Bluetooth headset.

Headsets are a class of objects I’d always disdained. We’ve all seen people walking around, seemingly talking to themselves, until we saw that thing sticking out from their ear like some cyborg from Star Trek. The epitome of dork.

But I ended up wearing one anyway. Working at Plugable, we are often asked to try out newly introduced products—to test for unforeseen issues in real-life conditions and to explore new possibilities. A few weeks ago, Sam Morgan, the headman for the headset, offered me one.

So I took it. “Wouldn’t hurt to do some testing,” I thought, expecting to toss it in a drawer forever when done. I stuck it in my ear, fired up my phone, and connected it. Ho-hum. It’s a Bluetooth headset. Works great. Nothing more to see here. Move along.

But when I got home, I got curious. Would it solve a problem I’d been wrestling with for the past six months or so?

I like to listen to things. Music, of course, but I also love listening to stuff that expands the mind. Podcasts, audio books, university lectures on history and philosophy–stuff like that. Previously I would listen to them as a way of surviving my excruciating 4-hour bus commute. The bus problem was solved by moving closer to my job, but I found myself missing the mental stimulation that helped me endure the daily round trip.

On the bus I would create my own little world with my sound-canceling headphones and nobody cared. But at home, I want to be there. If my wife has a question, if my teenage daughter asks for life advice (it’s got to happen eventually), I don’t want to miss it because I’m zoning out in headphone land. But these kinds of interactions don’t happen all that often and I could profitably fill the time in-between. I wanted to listen to lectures on existentialism or the Assyrian Empire without driving away family members whose tastes are a bit different from mine, and without competing with my wife’s Facebook videos and the TV.

I tried listening to a lecture on the Bluetooth headset, mainly to see if it was possible. It was! It took a little tweaking of the settings on my Droid Turbo 2 (I had to set Media Audio for it in the Bluetooth settings), but soon I was in business. I could hear the sound clearly in one ear, but was present in the world with the other.

I could listen early in the morning without waking my daughter and late at night without waking my wife. I could mitigate the mind-deadening effect of chores like cleaning and dish washing. When someone wanted to talk to me, I just tapped the headset to pause the sound. I could access the Google assistant with just a few words, even if something was playing. The headset was light and easy to wear.

Never thought I would be doing this!

That day, when my son called from his job in New York, I just tapped the headset and was talking to him. I had become that Star Trek guy! My son could hear me perfectly, and my hand didn’t get numb holding my phone as I paced around during the 90 minute conversation (He wanted advice).

I found myself reaching for the headset so often, I kept it tethered to my Plugable charger when not in use. But the other night it wasn’t there! I frantically searched my backpack, my desk, the bathroom, the living room, and the bedside drawer. As it failed to turn up in one place after another, I was surprisingly disappointed. Would I have to buy another one? Should I buy two, in case this happens again?

Fortunately I found it buried deep in a pocket during the third search of my backpack, and I was filled with joy. Who could imagine this little bit of plastic could cause such emotion? The Plugable Bluetooth headset had become an important accessory in my life, and I don’t want to live without it. I wonder if I can get an employee discount on a second one… 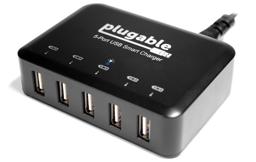