Click on the picture for more detail. This is a picture of my work desk today and how I’m using the Plugable dock myself.

(yes — I cleaned off a few books and papers — it’s usually much messier!)

My $330 Acer Aspire One Atom 1.6Ghz netbook is on the left — I like having a very thin, light, and cheap development platform that I can throw in a bag to go to a coffee shop, etc. But I can’t stand working on the small 10″ screen all day, so that large screen to the right (21.5″) is a necessity. And using the netbook trackpad is right out — I definitely need a full sized mouse. The keyboard on the Acer isn’t that bad, but I like having the slightly larger keys and distance from the screen that the USB keyboard gives me.

So what’s connected to the dock there in the middle? Up the left hand side, from the bottom, are:

On the right hand side of the dock, the two cables are the USB keyboard and mouse. And on the right side of the netbook are power for the netbook, and a USB cable going down to another device (a SheevaPlug) nearby.

So every time I take my highly portable netbook anywhere — without the dock, I’d have 8(!) cables to unplug/replug every time, including a big, fat DVI->VGA cable to screw into the side of my netbook. Instead, I have 2 or 3 cables, and get connected to a ton of devices — including the large screen, which absolutely transforms this cheap netbook into something far more functional.

Also, I’m constantly switching between Windows and Linux, and all I need to do is reboot, and all the devices here can work in both environments. In this pic, I’m running Linux. Note that on Windows, there are production drivers that “just work” (especially if you have Microsoft’s Windows Update enabled), While Linux requires some configuration yet, and has limitations — I’m only using the one large screen (the netbook screen is a text terminal), and I’m not using some things like the audio ports there yet.

I’ve also got a Macbook on the shelf to the left – plug it in, and again all the devices work, including that extra large display. The simple ubiquity of USB is extremely compelling with devices like this that have been designed to use components with drivers across all the major platforms.

I love this setup – it’s far better with the dock than without it. Over the next few weeks, as Windows 7 launches, etc., look for more posts here on how to use the dock in these different environments. For example, Windows 7’s improved Windows Update and driver install are a big step forward that have to be seen to be appreciated.

And by the way, in the picture on the large screen – you can see firefox on Linux, showing the Plugable website. and a smaller window, which is a terminal connected over that other USB wire, to a SheevaPlug which is getting an install of the latest version of Debian. That’s another interesting possibility. More on that later … 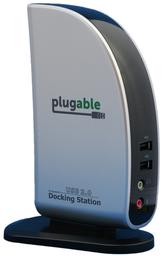