Charging Your iPad or iPhone with a USB Hub

“The only reason I bought this was that my computer’s USB doesn’t provide enough power to charge my iPad 2. Unfortunately, this hub doesn’t charge the iPad either, so it’s completely useless to me.”

“Bought this as a powered USB hub so that an iPhone and iPad could be connected to a MacBook Pro and charge both. Does not work.”

“So much for a ‘powered’ usb hub, it doesn’t power my iPad …, which defeats the purpose of me even getting it.”

It seems like it should be so easy. You have a hub that is plugged into an electrical socket. Your iPad is plugged into the hub. It should recharge. But it says, “Not Charging.” Why?

It all has to do with how electrical current is supposed to flow through USB ports and with confusion caused by proprietary behaviors that Apple has implemented in its product ecosystem that lead to different recharging results in seemingly identical scenarios.

If you want to avoid the answer to the “why” question and just know how to charge your Apple iPad, iPhone, or iPod Touch when it’s connected to a self-powered hub, here are your two options.

Option 1: The iPad/iPhone/iPod is connected to a hub that is plugged into an electrical outlet and a computer simultaneously. The Apple device will recharge by pulling current at a rate of 500 milliamps when attached to this hub (the hub’s power supply must have enough amperage to provide this current).

Option 2: The iPad/iPhone/iPod is connected to a hub that is plugged into an electrical outlet but not a computer. The Apple device’s power must be completely turned off for the device to recharge when attached to this hub. Here are step-by-step instructions.

Please be aware that if you attach multiple Apple devices at one time to your hub in either scenario that you might start to exceed the amperage available in your hub’s power supply. We cannot verify charging will occur once this has occurred.

In our tests, when we overloaded the available power supply, we saw varying results in how the attached devices consumed power. However, we did observe that iPhones and iPods (not iPads) still would charge–albeit very slowly–when drawing power at the 100 milliamp rate.

If you want to know more about how USB power works and where Apple deviates from the USB 2.0 standards, read on.

USB Power Primer
The USB 2.0 spec permits devices to pull current at a default rate of 100 milliamps from a USB 2.0 port (we’ll call this the host)–enough to power a mouse but hardly enough to charge an iPad battery.

If a USB 2.0 device needs current at faster rate than 100 milliamps to function, it is allowed to negotiate with the host to increase its consumption rate to a maximum of 500 milliamps from the host’s port.

When a device tries to draw more current than is available to the host–often described as overcurrent–you can end up with a warning that there isn’t sufficient power to meet the device’s needs. This warning might appear on the host (e.g., a popup in the Windows taskbar, like the one shown to the right). But others, like the Mac, disable the port without any warning, often creating the erroneous impression that the devices are broken. They aren’t–they’re just not able to draw any power from the port anymore. A reboot re-enables the port, but the port will shut down again if you don’t take any action to reduce the power consumption by the mix of devices attached to the port.

When multiple devices are connected to a single USB 2.0 port via an unpowered hub, it can lead to an overcurrent situation, especially because all the devices attached to the hub have to share the 500 milliamp current available through the host’s port. The hub can only split the available current, not multiply it.

A self-powered USB 2.0 hub–that is, one with its own AC adapter–can alleviate this situation, because it can tell the host, “Don’t worry, I can take over as the provider of the current that these devices want.”

When There’s No Host
When a self-powered hub is plugged into an electrical outlet but not connected to a host–think of it as a USB-based power strip in this configuration–it becomes wildly unpredictable how devices attached to the hub will behave when trying to draw power. The original USB 2.0 spec just didn’t envision how important USB-based power consumpution would become.

Without guidance from the spec on what to do in this scenario, device manufacturers can implement whatever behaviors they desire. Some devices will pull power at the same rate as they do when attached to a host-connected hub. Other devices will downgrade to the 100 milliamp default. Certain devices may try to exceed the 500 milliamp limit in the USB 2.0 spec–not necessarily a bad thing for improving device charging times.

If you have questions about whether your specific phone, tablet, or handheld device will charge if it’s plugged into a hub that’s being used like a power strip, the only way to know is to plug the device into the hub and see what happens.

Apple Bites Back
Apple makes great devices, but it also makes the USB-charging situation even more confusing. As explained, the iPad, iPod, and iPhone will recharge when pulling 500 milliamps of current. But Apple has engineered these devices to prefer to pull more than USB 2.0-specified  maximum of 500 milliamps. However, to do so, the devices must be connected directly to USB ports that have been customized with Apple’s proprietary charging extensions.

Click the image to go to Apple's support document that explains the proprietary USB charging behaviors in Apple's product ecosystem.

In a support document on Apple.com about USB charging, Apple explains that “some Apple computers and displays can provide up to 1100 milliamps [1.1 amps] … through the port to which the Apple peripheral or device is connected.” In other words, when an iPad or iPhone is connected to a newer Mac as its USB host, an iPad can draw current at more than twice the standard USB 2.0 rate.

The current isn’t delivered at as fast a rate as the 2.1 amps provided by Apple’s special AC wall adapter for recharging an iPad. Gizmodo has done a speed test of the fastest (and slowest) ways to charge an iPad. Charging via a Mac’s USB port at the 1.1 amp rate was the slowest way in the Gizmodo test, but it still got the job done. As we’ve identified, even 500 milliamps will get the job done as long as the iPad’s screen or power is off.

And 500 milliamps is the only rate that you’ll ever get from a Windows PC or any other USB 2.0 host that lacks Apple’s proprietary charging extensions.

You might be thinking that the ideal solution is just to get a Mac plus a USB hub. Then you can have all the benefits of multiple USB ports and can use one to charge your iPad, iPhone, or iPod Touch at the faster rate available when connected directly to a Mac.

Unfortunately Apple only allows these devices to draw the 1.1-amp current from a Mac’s USB port via a direct connection. Apple explains: “An Apple peripheral device must be plugged directly into an Apple computer or display. Apple peripheral devices connected to hubs will not have access to extra power above the standard USB specification of 500 milliamps.”

In other words, if you connect a hub–powered or not– to your Mac, you lose access to the proprietary charging extensions in the Mac’s USB port that allow the Mac to charge your iPad, iPhone, or iPod at the 1.1-amp rate.

If you want to know how Apple establishes these proprietary USB charging behaviors, Ladyada.net has a great video and blog post on the technical underpinnings of the mysteries of Apple device charging. As she explains, it has to do with how Apple has engineered its devices to deviate from the USB 2.0 spec when they sense a special amount of voltage from the power source on two of the four lines that make up a USB connection.

Where Do We Go from Here
There is hope that in the future USB-connectable devices will consume power in a way that meets the “universal” promise in the USB name.

There is now a USB battery-charging spec that was developed to standardize USB-based charging behaviors. Unfortunately, the spec has not yet been widely adopted. And the lack of any strong industry efforts to market or brand spec compliance makes it difficult for customers to identify and buy products that already follow the spec.

In a world where following this spec was the norm, you could plug your hub into a wall, attach a bunch of devices, and get them all to recharge in a reasonable and predictable amount of time without having to take any special action.

Regardless of what happens in the future, our aim always is to make sure that you know what to expect from Plugable products today and that you are satisfied with the ones you purchase. If you have questions or comments about this article or device charging in general, feel free to leave a reply here, and we’ll respond.

If you have other questions about any Plugable hubs, docking stations, adapters, or cables, get in touch with us through our support website at support.plugable.com or e-mail us at support@plugable.com. We’re here to help. 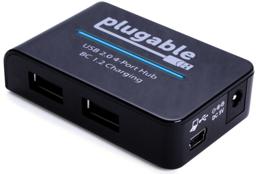