Update 7/26/16: In the year since the release of Windows 10, it has been installed on over 350 million PCs worldwide and most feedback has been quite positive.

Most of the challenges covered in the “Potential Issues” section of this post are no longer relevant thanks to the diligent work of DisplayLink and Microsoft updating their respective software to improve performance and stability over the past year.

Summary: Windows 10 requires the latest drivers we recommend to be re-installed *after* OS upgrade is complete.

As we near the July 29th release of Windows 10, we’re getting frequent questions from customers who are excited about this new operating system and inquiring as to how things will behave when using their Plugable USB graphics device(s) with Microsoft’s new flagship OS. The purpose of this post is to provide some “best practices” guidance regarding Windows 10 and installation of Plugable’s docking stations and USB graphics adapters.

Most of the Plugable support crew are seasoned IT/support veterans, and as such we’re a cautious bunch when it comes to immediately migrating to a new operating system. (See here for our take on installing Windows 10 as soon as it’s available. The nutshell version is that as with any major OS upgrade, we suggest waiting a bit before installing on any mission-critical systems while initial issues are discovered are worked through.)

That being said, we realize, with all the excitement surrounding the upcoming release many users are going to want to dive right in. With that, here are our recommendations for how to approach different installation scenarios as well as some additional information about Windows 10:

Scenario 1: Upgrading to Windows 10 from an existing Windows 7/8 system

This is likely to be the most common scenario for the majority of users. Please note that all previous DisplayLink drivers are not compatible with Windows 10. As such, we suggest the following steps for an upgrade installation of Windows 10:

Scenario 3: Windows 10 was installed with a docking station or USB graphics devices attached and/or previous DisplayLink drivers installed, and things aren’t working after the upgrade

Some will wonder why there might be issues using USB graphics with Windows 10 when these same USB devices generally work quite well with Windows 7 and Windows 8. The primary reason is Windows 10 introduces a new driver model (WDDM 2.0) for the graphics chips in PCs that are responsible for outputting video (known as GPUs).

The primary GPU and its drivers play a key role in the functionality of USB graphics, as the DisplayLink software interacts heavily with these drivers to enable graphical output via USB. Simply put, both the GPU drivers and DisplayLink drivers need to function together seamlessly for everything to work as it should.

So when Microsoft introduces a new graphics driver model such as WDDM 2.0, GPU manufacturers such as AMD, Intel, and Nvidia must update their drivers to support this new model, and so must DisplayLink. This shift to a new driver model generally enables better performance in the long term, but early in the release cycle, issues/bugs can appear that were not present in previous operating systems.

Updated 6/26/16: We’re happy to report that most of the challenges covered in this list are no longer relevant thanks to the diligent work of DisplayLink, Microsoft, and others updating their respective software to improve performance and stability over the past year.

For the most part, we’ve had positive results testing our Plugable USB docking stations and graphics adapters with the final release build of Windows 10. We have encountered a few occasional issues which we’re documenting below:

As always, we welcome comments and feedback below. Since we’re so early in the life cycle of Windows 10, if you encounter any consistently unexpected behavior, we encourage you to post details on DisplayLink’s Windows 10 forum as well, as they are tracking issues that require further investigation.

If you’re a user of a Plugable USB graphics device and are experiencing issues, we’re here to help! If support is needed, please run our PlugDebug tool found here to collect system logs, and send the resulting file to support@plugable.com along with a description of the behavior you’re experiencing and any additional details you feel are relevant. 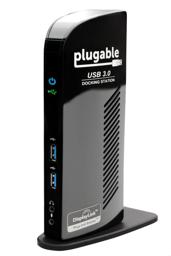